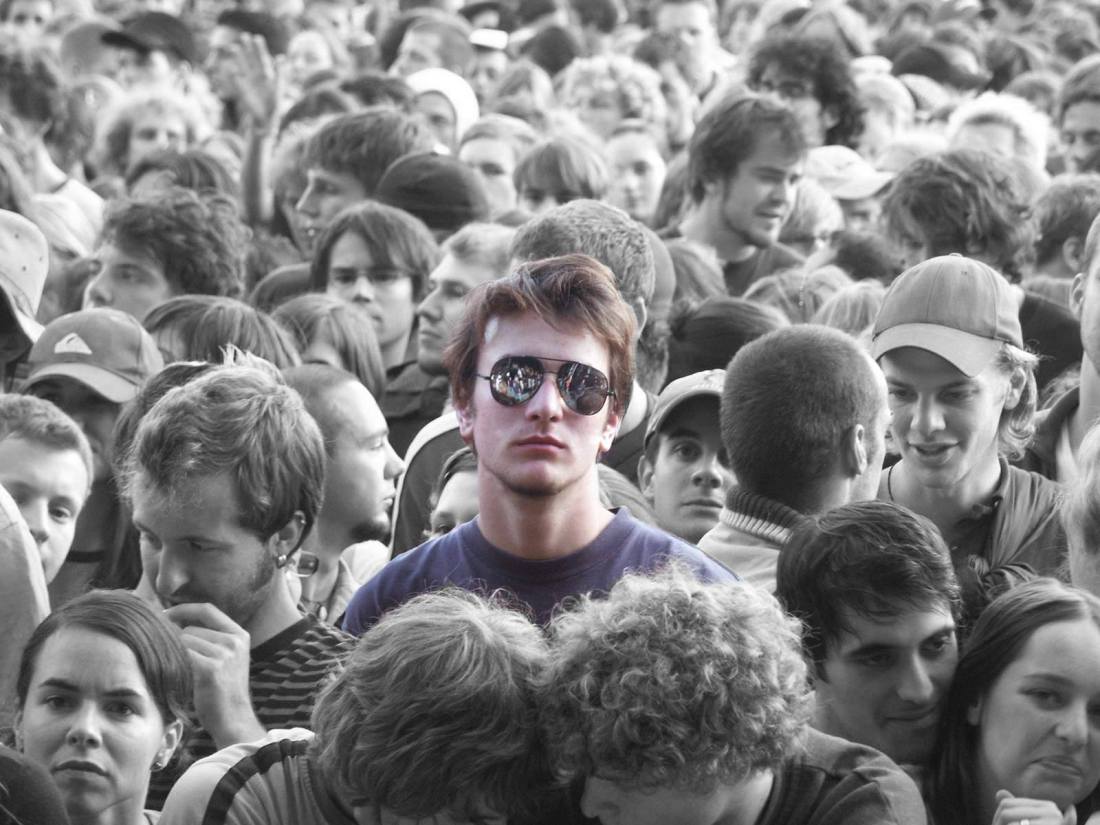 I think at some point or another we’ve all had the experience of being singled out of a crowd at a time or place we didn’t really expect. It’s happened to me occasionally, but one that really comes to mind this morning is the time several summers ago when I was visiting Yellowstone National Park with some friends and family. We had taken a bathroom break at one of the visitor centers. The place was swarming. It was peak season—as I recall it was hard to get a parking spot. People were heading in different directions. Some were going into the building to speak with the park rangers, some were heading into the restroom area, some were heading into the dining hall area to get food, and others were heading in the opposite direction, out into the park. Out of this crowded mix of people comes a voice, directed at me: “University of Richmond! Hey! Did you go there?!”

I looked down and, sure enough, I was wearing the University of Richmond T-Shirt I had bought in the campus bookstore. I, myself, am not a graduate of UR, but as the Lutheran campus pastor at the time I liked to show my support of the school. In any case, there in the middle of the summer tourism crowd, a kind woman had seen my t-shirt and decided to approach me. As it turns out she graduated from U.R. and also is good friends with a person in this congregation. We had a brief but great conversation. She knew exactly where Epiphany was and had driven by it numerous times. It’s not like she recognized me, per se, but If I hadn’t been wearing that t-shirt on that particular day, we would have walked right by each other without knowing we had so much in common.

We’re at the point in Jesus’ life where he can’t walk by anyone without getting recognized. He and his disciples actually can’t go anywhere without getting recognized. And it doesn’t have anything to do with what they’re wearing. It’s not altogether clear exactly what makes him stand out. Have people been talking about what Jesus looks like? Do they know he is typically seen with a group of other men and women who treat him as a teacher? There is no security detail around him, and there is no indication anywhere in Scripture that he dresses a certain way. What makes Jesus so recognizable, even when he is really trying to be discreet? He gets his disciples together and tries to sneak away for a bit of a retreat and people still manage to pinpoint him. And they don’t just pinpoint him. They’re not looking for conversation or an autograph. They want help. They are bringing their sick relatives to him.

I’ve long been intrigued by what the real Jesus looked like. Have you? I think my first impressions of Jesus were the ones given to me in Sunday School and Vacation Bible School when I was a child. If you wanted to know who Jesus was in a picture, you just look for a white-skinned man, medium height and build, dressed in a blazing white robe and sometimes a blue sash. He would have brown hair, of course, his wavy locks carefully combed down the back of his neck. Usually there’s a beard and mustache, well-groomed. After living for a year around middle-easterners I started to realize there’s no way that Jesus looked quite like that. That image had been based on the white-centered culture of my childhood.

Several years ago some researchers put together a computerized image of how Jesus might have actually looked, at least based on archaeological and genetic records of the time. The result was something entirely different than I was expecting. Their picture showed a man who was much less conspicuous than I was used to. His hair was wiry and close-cropped.His beard and mustache looked like they needed a some attention from a Remington. And the skin was brown and weathered. I am not sure I would have ever recognized that as Jesus, especially in a crowd. And at this point the crowd around Jesus is becoming huge. It has taken on a life of its own and cannot be ignored. The disciples can’t even find time to eat because they’re dealing with it.

I have come to understand that most people have pretty strong reactions to crowds. A lot of people avoid them at all costs, even before COVID. They don’t like the feeling of being near too many people. It feels dangerous, annoying. And so they try at all costs to stay away. Some people love crowds. They feed into the energy that comes with lots of people. They have FOMO—that “fear of missing out.” They find the mosh pit at the concert. They go to the street festival. They pay for the expensive tickets down on the front row.

Still other people look at crowds and see a chance to exploit people or control them. These are the dictators, the demagogues. These are the worldly leaders who know the right words to say or the symbolic actions that will increase their own power. They want the crowds’ adoration. Sometimes they deploy tanks and weapons to disperse the people, ignoring their true needs. We all have this tendency within us—that tendency to milk the multitude’s praise, to use them in order to make us feel great and important. Where is Jesus in the midst of these people crowding the marketplace? What’s his reaction?

The former dean of one of our ELCA seminaries tells of an experience she had not too long ago as a part of a delegation of the Lutheran World Federation to rural Africa. In reaching a very remote part of Africa, Lutheran World Federation workers spent time in a village where they brought medicine, drilled wells, improved sanitation, provided caring ministry, and helped people rebuild their lives after years of drought and disease. Maybe some of the education kits that our Vacation Bible School will be assembling today will be handed out that way.

A couple of years later, this same seminary dean was a part of another Lutheran World Federation delegation that made its way through the same area en route to an even more remote region. The villagers came and lined the road with cheers and celebration. The delegation workers were confused by the response. They got out of their caravan of trucks and greeted the people, wondering what was the reason for all this joy. The villagers thanked the workers for rescuing them earlier, for bringing new life to their village by tending to their most basic, human needs. As the villagers expressed their thanks, the LWF delegation workers tried to explain that they were not, in fact, the workers who had done the work in their area. One of the village leaders said, “Yes, you are the workers who were here.” The delegation leader insisted that not a single one of the current workers in their caravan had ever been in that village to do anything.

At that point, the village leader took a group of the workers to the side of one of the trucks and said, pointing to the Luther seal on it, with the cross in the center of the heart, “Yes, it was you. You are the people of the seal. You are the ones.”

My guess is that people have come to understand that Jesus has a seal, and it is the way he acts around the people. He does not avoid the crowds, nor does he feed into the energy for thrills and excitement. Significantly, he does not exploit or control or threaten. He shepherds. When sick people are brought to him, he heals them. When mourning people approach him, he comforts them. When people have questions—especially questions about God and God’s reign of justice and mercy—Jesus patiently engages them in dialogue. The gospel lesson today says that when Jesus looks at the great crowd he has compassion for them, “because they were like sheep without a shepherd.” When word passes from person to person about him, they are sharing not so much the way he looks, but the kinds of things he is doing.

And they will see greater compassion than this. This crowd is adoring and eager to meet him. Later Jesus will be thrust into the center of an angry crowd, one with cries for blood on their lips. This is our crowd, and he will still respond with compassion. He will put his own needs aside and heal us in our deepest needs. Our need for mercy and forgiveness. Our need to be included in what God is doing.

This is our call, as people who have been forgiven and fed: to be known in the crowd of humanity for his compassion to us perhaps above all else. Not for our worship styles. Not our church buildings. Probably not our education programs, nor how well we articulate theology. Definitely not our voting records. But this: how are we responding to the needs of the world? Is Jesus the shepherd leading us into greater self-giving, or are our own voices of ego and ideology still guiding the way?

I was speaking several months ago with one aged member of this congregation. She has been homebound for years, but still is quite robust in health and her mind is sharp. The COVID vaccines were just being made available to the general public and, because of her age, she was in the first group to receive it. She told me she did not want to get the vaccine because she, as she told it, was on borrowed time anyway and that someone younger than her, a person with their life ahead of them or a parent with children should receive her vaccine. I was flabbergasted as I realized she was talking about someone like me. She wasn’t rejecting her vaccine because of some fear or some ideological reason. She wanted to give up her precious vaccine, putting her health on the line, so that someone like me could get it sooner. The compassion humbled me speechless. As it happens, she comes from an era when Americans were formed by hardship to make sacrifices for the good of the whole, who had been taught to think of the crowd and its needs, not just her own. To this day when I think of Sonya Fluckiger, I think primarily of that conversation. Of that compassion.

Now we go, nourished, gathered, sent. We go to be in the crowd, and when people walk by us, when they spot us from across the way, they will single us out. They’ll notice something about us: that seal. That unforgettable seal of compassion.