A sermon for the Presentation of Our Lord

It was just a few weeks ago. I needed to pick up a few things at Target and I had my 3-year-old son with me. He’s only recently been allowed to walk by himself in the store instead of being strapped into the cart, but I thought I’d give it a go. In we walk, the two of us together, and make our way across the store by way of the wide aisle. We get about halfway to the food section and I realize he’s not right beside me anymore. I turn around and find that he is face to face with a woman I’ve never seen before. She’s got a red top on and khaki pants, so I figure she must be a store employee. She has crouched down to talk to him right next to her re-stocking cart, and as I approach them she looks up and says, “You must be Jasper’s father!”

“Yes,” I explained, as I got ready to pull him away so she could get back to work.

“Oh, let me talk to Jasper,” she said, “I heard his voice since he came in the store and I’ve been hoping I’d get to see him.”

“Oh, yes! I love him. I met him back in the fall and have seen him a few times, but it’s been several months since we’ve run into each other!”

Jasper stood there and gave me a look like, “Dad, leave us alone.”

So I watched them talk for a few minutes, utterly engaged with one another.

It was one of those moments where I realized that my own son, although he was still young, although he still has so much to learn about people and strangers and conversations, was already forming relationships and interacting with the world apart from me. Although I am very much in control of his world, he was already able to venture out from my care and know people I don’t know. It’s kind of a proud but scary feeling. The Target employee was excellent, though.

It wasn’t Target, but the Jerusalem Temple for Jesus. And he wasn’t three-years-old and able to talk. He was just forty days old, right at that point in his development where he might have been able to start smiling at people, where his eyes could focus only about 8 to 12 inches away. Mary and Joseph walk in and immediately encounter someone who has been waiting for him. This stranger—not a temple employee, but a faithful, devout elder of the city—scoops Jesus from Mary’s arms (can you believe it?!) and begins a conversation.

The man hasn’t ever actually met Jesus before, but in some way he knows him. He knows him because he’s been waiting for him—waiting for the consolation of God’s people—and the Holy Spirit has led him to the Temple that day. And then here comes Anna, another elder who happened to never leave the temple, so faithful was she in her devotion to God. She begins to praise God and again makes a remark about waiting for him like everyone has been waiting for redemption.

The holy couple are probably both proud and a bit scared. They have that moment—that moment when they realize their child, still so young, will be forming relationships and interacting with the world apart from them. In fact, that is the sole purpose of Jesus’ existence, his reason for living, moreso than any other human: to form a relationship of love and mercy with all the people of the earth, to have an impact on everyone. As Simeon says, he is destined for the rising and falling of many. He is to be consolation. He is to be redemption.

In the modern-day classic comedy Groundhog Day, starring Bill Murray and Andie McDowell, the main character, TV weatherman Phil Connors, finds himself mysteriously stuck in a time loop where he always wakes up at 6:00am on February 2. He relives the day over and over again. He never ages, the town never changes, and he goes through the course of each February 2 meeting the same people and having the same opportunities. The whole time, of course, he is waiting and waiting to figure out how he can be redeemed from the whole situation. Quite literally, he seeks consolation, deliverance, from what quickly becomes a hell for him. We watch him respond to his situation any number of ways. He is transformed through his waiting but in the end his deliverance comes from within. He figures out, at long last, how to reach his own consolation. 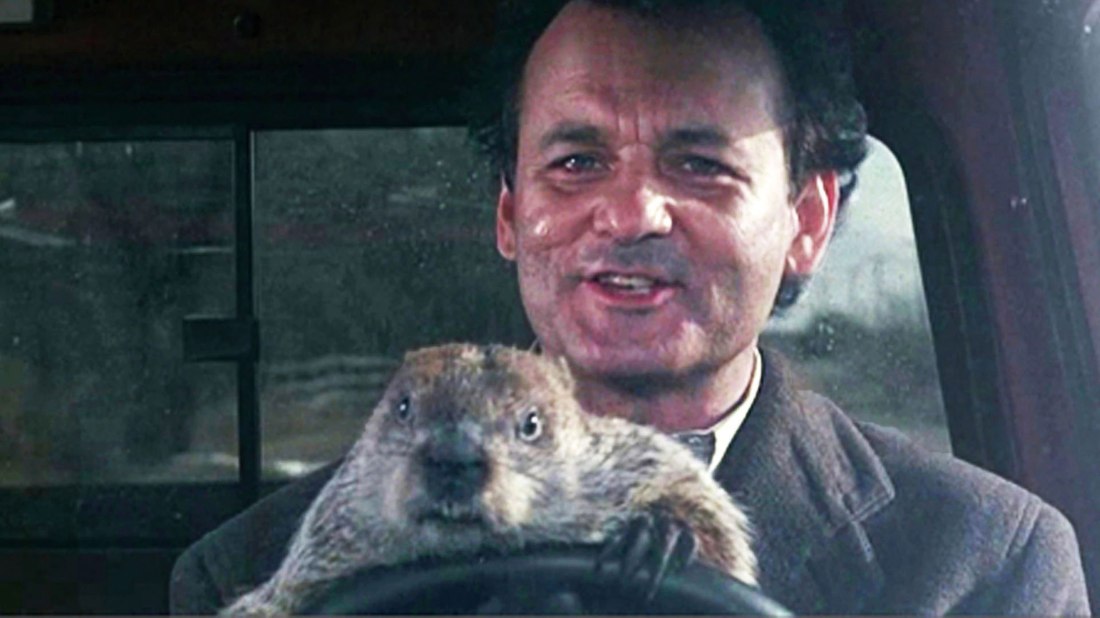 It is a charming movie and on some levels it teaches good lessons about things like attitude and charity and suffering, but Simeon and Anna are both looking for and find consolation and redemption from outside themselves. Their deliverance into a new world comes from a Savior. Their hopes are fulfilled not because some thought or attitude suddenly clicks from within, like trial-and-error self-help situation, checking out the books one-by-one from the library, but because they see God has reached down into the world and given his Son who is going to have conversations and relationships with people despite their brokenness. He is ours. The wait is over.

A better comparison to Simeon and Anna and to ourselves on this February 2 is the Greensboro Four, the young black men who, 60 years ago today, were sitting down at a whites-only Woolworth counter in Greensboro, NC, and waiting for a meal. They were waiting for consolation, too, for a redemption from a corrupt system of racial discrimination that would only come about when white people in power would let it happen. They, too, found themselves in a hellish time loop, day after day at the same counter, waiting for equality and facing hostility. They would end up waiting 146 days to get served lunch, but that’s only counting from the beginning of the sit-in. Technically-speaking you could say they waited over 200 years.

Simeon and Anna, both at the end of their lives, reveal that waiting and seeking is part of faith. And they both reveal that the only true deliverance from world that repeats its darkness and sorrow and injustice over and over again involves seeing the light of Jesus, of letting him love us and claiming that love. The only real fulfillment to the long wait for salvation is to behold the Son of God whose arrival reveals our inner thoughts, who brings the fall and rise of many. And the ones who fall are the ones we tend to think of as great and powerful, the ones who abuse authority, who lord over their people, who use things like religion and the economy to oppress others. And the ones who rise are the ones we cast aside, who are poor, or who are mourning, elderly, feeble, fragile.

Psalm 84, appointed for today, the Presentation of Our Lord, makes note of how both the sparrow and the swallow are able to make their nests by the altars of the Lord. Two of the most insignificant, most delicate, most non-descript creatures find place in God’s presence, right at its heart. Who are the sparrow-like in our time? Who are the people whose existence is so vulnerable, dependent on others for safety? They are the ones able to draw nearest to God.

You may be interested to know there is only one other person in the gospel of Luke who is described as waiting and looking for God in the same way and that person, too, ends up holding Jesus. It comes at the very end of the gospel as Jesus’ limp and lifeless body is taken down from the cross and his followers wonder what to do with it. Another man, like Simeon, appears from nowhere and asks Pilate for the body so he may place it in a tomb. His name is Joseph of Arimathea, and he holds the broken body of Christ the same way Simeon held the child. He too is described as a good and righteous man who is looking for the kingdom of God.

Mary and Joseph present Jesus in the Temple forty days after his birth, but in Jesus’ death we see just how much God’s love is presented to us. The family comes to be purified according to the law, but through the cross we see how we all are purified by love. Simeon and Anna see a light beginning to shine on the child’s fortieth day but Easter morning will prove just how bright that light will get. These devout and righteous men may hold Jesus in their arms, but in reality it is the other way around: Jesus holds us—in birth, in death, in the life to come.

And today we behold him again, or, rather, he holds us, in bread and wine, in his words,  in the promise of deliverance and salvation from all that holds you captive. He is your Savior. Let him crouch down, scoop you up, love you forever. “Master, now you dismiss your servants in peace, according to your word. Our own eyes have seen your salvation which you have prepared—like a table, like a feast, like a lunch counter—in the presence of all your peoples. 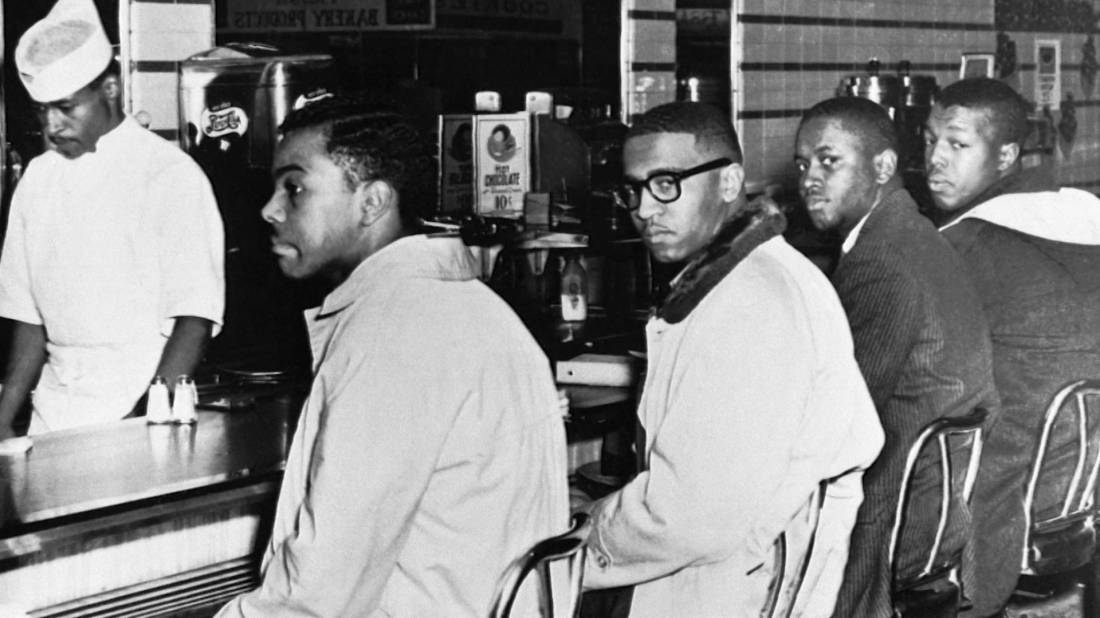