A sermon for the Nativity of Our Lord, Christmas Eve

We are gathered amid the glow of candles and carols tonight, perhaps warmed by the cheer this special day brings, but it has been a rough Advent season for Epiphany Lutheran Church. Amid all the festive preparations that come at this time of year, our community has been laying out food for funeral receptions and gathering in the columbarium to remember the lives of three of our own—three we had every reason to believe would be celebrating the Savior’s birth with us this year.

Maybe that’s where you find yourself this Christmas, too. The prophet Isaiah tonight speaks of people who’ve been walking in darkness, of people who dwell in a land of deep darkness, and while Isaiah was initially speaking to an ancient Israel waiting for a redeemer, some of us feel something like Isaiah might be talking directly to where we are. It feels like darkness now: a sense of loss and wandering and wondering about how to move forward.

Two weeks ago I was visiting the hospital room where one gentleman was watching his wife of almost 56 years slowly slip away. As I prepared to leave he pulled me out into the hallway to speak one on one. Bereft and almost at a loss of words as their time was growing short, he looked straight at me and said, “Well, I can say I have fulfilled my marriage vows to her. I have been faithful. I have loved her. I have kept those promises I made back in 1964.” And then, to my astonishment, right there in the hospital hallway, with no prompting at all, as if to puncuate his heartache, between the beeping of heart monitors and the shuffling feet of nurses he began to recite those vows, one by one. “I, Richard, take you, MarthaiIn plenty and in want, in joy and sorrow, in sickness and in health.” A man’s love for his life’s partner, reaching its climax, even in her final days. 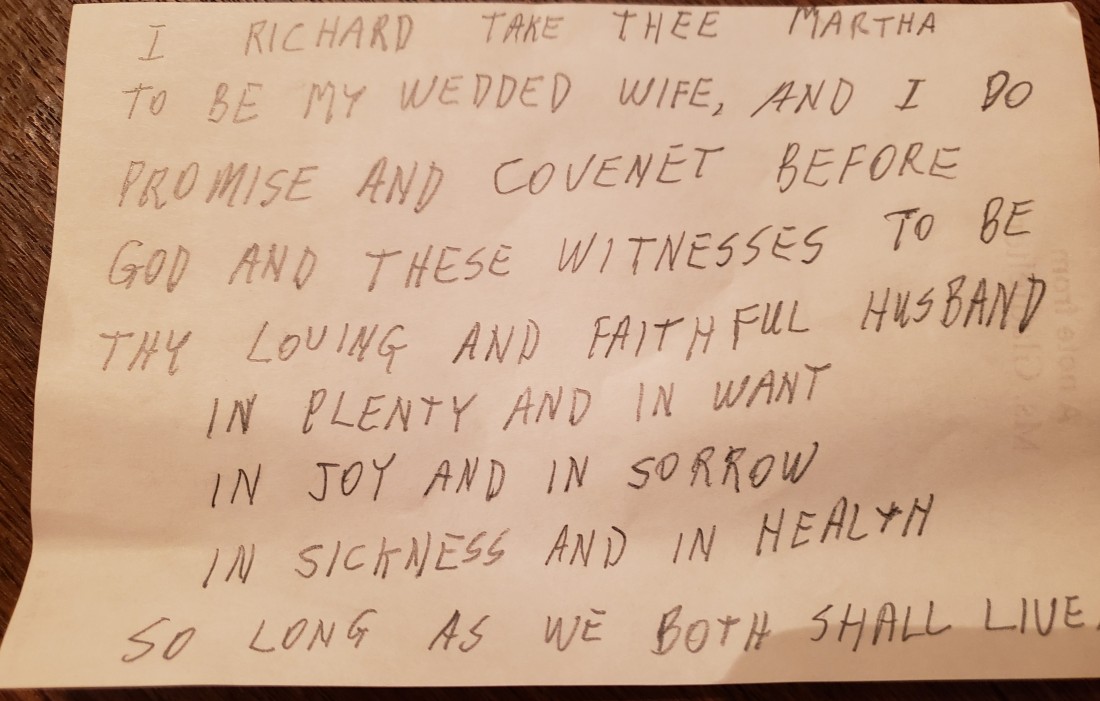 It occurs to me that’s what this special day brings, why we’re gathered here, why the candles glow. The news of Christmas all about the fulfillment of promises. God has fulfilled his promise to shine a light in the darkness. It is about God staying true to God’s steadfast love, making good on his vow to be with his people in plenty and in want, in joy and sorrow, in sickness and health. Indeed, if we say anything about this night, it is that God has reminded us of his love for us, even as the world slips away. In the midst of a rough Advent season that man in the hallway spoke gospel truth to me, and tonight we gather to sing and be filled with joy. “For a child has been born for us, a son given to us.” He is ours. This birth is God’s promise that though we might feel lost, we are found…that though we might feel empty, God fills us with good things…that though we might feel defeated by what life throws at us, God has broken the rod of our oppressor as on the day of Midian, and the boots of the warriors that trample upon us—the sorrow, the grief, the despair—have been burned as fuel for the fire. Because God fulfills his promises in Christ, we have life forevermore.

Martin Luther, the church reformer, puts it this way in a short little essay for his students from 1522 called “A Brief Instruction on What to Look for in the Gospels.” The essay’s title is its whole point: what one should be looking for when reading or hearing one of the books about Jesus in Scripture. And we read from one this night. Luther says, “Before you take Christ as an example, you accept and recognize him as a gift, as a present that God has given and that is your own. This means that when you hear or see Christ doing something or suffering something you don’t doubt that Christ himself, with his deeds and suffering, belongs to you.”

When God decides to fulfill a promise, you see, when God decides to give a gift, God gives it wholeheartedly, and nothing can take it away—not religious authorities who think he is too gracious with his love, too liberal in how he shows it. Not disciples who vow one moment to defend him and then the next deny they even know him. Not forces of sin and darkness that try to nail him to the cross. God promises and God gives and the gift lasts forever. It is ours. Jesus is given to you.

And here’s the thing: those who receive it find they cannot help but give it again. Those upon whom God’s light has shined cannot help but shine it on others. It’s like the heavens break open with the blast and cacophony of angel voices over a field of shepherds. Those shepherds then leave their flocks and hasten to the gift and find him wrapped in bands of cloth and lying in a manger. Those same shepherds then return, glorifying and praising God for all they had heard and seen.

We, who hear the promise tonight—we who receive the promise—become bearers of the promise of God’s unconditional love to the world. God makes good on God’s vows and we respond, shielding the weak, staying near the world in its fears, holding the hand of the lost. We, who sense the light tonight, or whenever, then shine the light where we go. 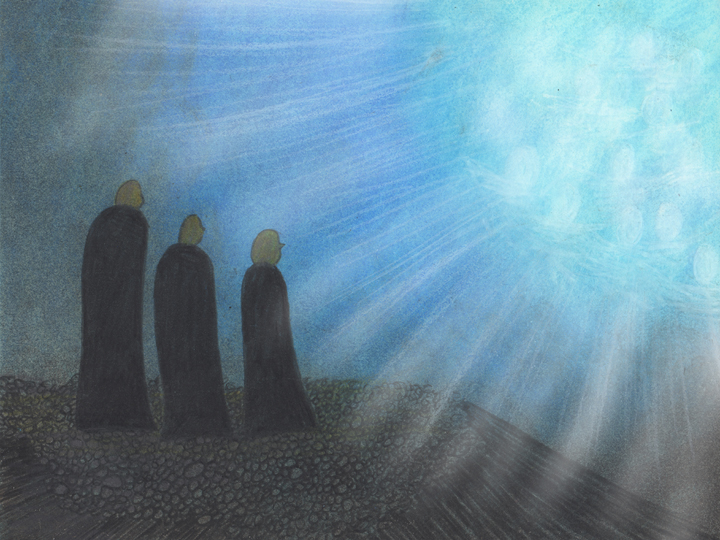 Some of you may have noticed that this year our congregation did not set up its outdoor nativity scene, the one on our front lawn here where the characters of the nativity and the Epiphany slowly but surely make their way to Bethlehem. I’ve heard the disappointment from a few community members and nursery school families. That display of mannequins on wire frames and covered with fabric have become one of our best evangelism tools. We decided, given how construction was affecting access to the lawn and dependable electricity sources, it would be good to take a break this year.

But the other day I received a text from one of our college students. It was text of a photo of her house way out in Louisa County. There, on top of her house, her father had hung the huge star from our nativity display. Her text read, “Now keep in mind we live a mile off the road so no one will ever see it.”

Normally this man the one who uses a complex system of fly-fishing rods and weights to sling the massive star over our cross. This year he took it home and I’m proud to tell you it is shining from his roof. I guess he couldn’t bear for that light not to shine. because the people who walk in darkness have seen a great light.

So, if the star is not here, but still shining out there somewhere, a beacon of promise, where then are the characters? Where are Mary and Joseph and the shepherds in the fields abiding, who eventually return glorifying God? Where are the magi, traveling from the East with their gifts, plodding their way toward the house in Bethlehem? That’s you and me, people.  This year and really every year. The gospel’s best evangelism tool, you are hope in the darkness, a sign that God’s promise of love has being fulfilled.

Here’s the “Brief Instruction on What to Look for Upon Being a Christian.” Bear the promise. Go with haste. Hang a star. Shine with your good deeds with the glory of a thousand angels. You and me, characters of God’s redeeming story out in the world, because the Son has been given. And they won’t miss the nativity scene because they will find it in you. And perhaps they’ll think in their minds, in the words of a simple tune by Garrison Keillor… 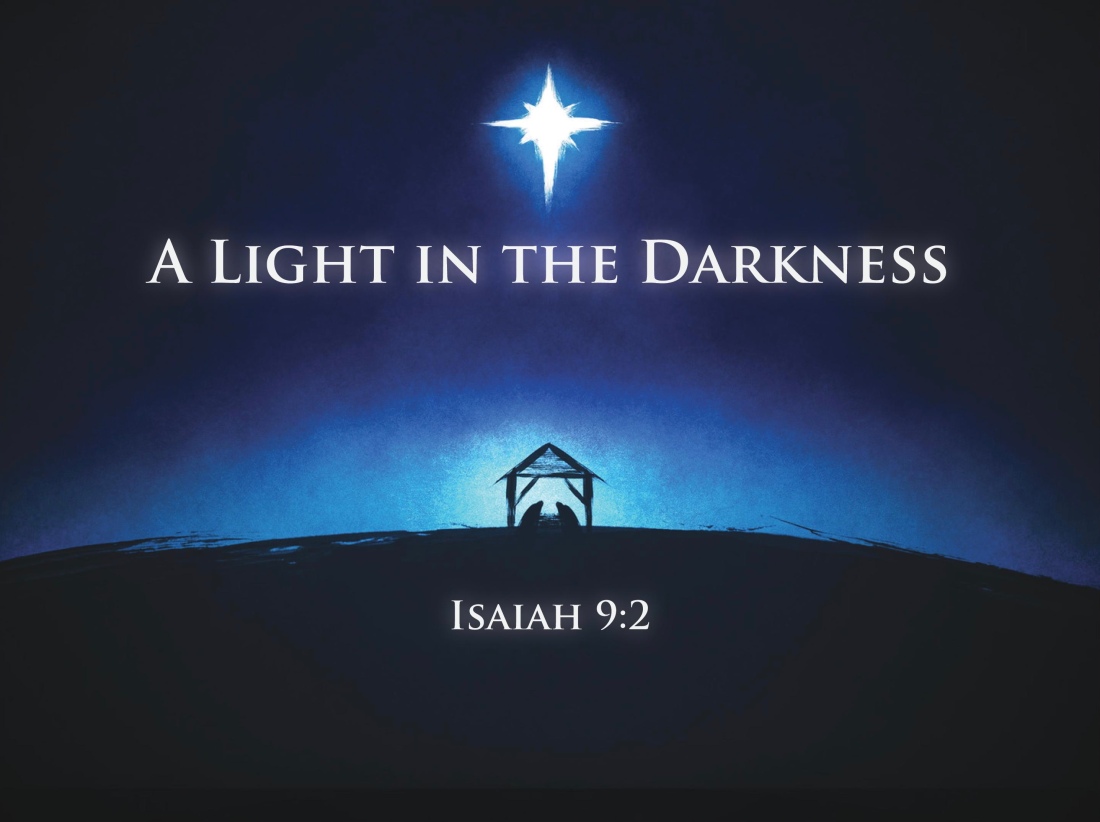