a sermon for the Fifth Sunday in Lent [Year C]

One time when we were horsing around on the bus as sixth-graders some mean older kid poured an entire bottle of Polo cologne on my head. Back in those days Polo was considered top shelf stuff, so I don’t know why the kid did it, or even why he had it at school. Seemed like a waste to me, and even with the all the windows open zooming down the road in the cool North Carolina spring we were practically choking on the smell. It permeated the entire bus, and I was the epicenter of it. I washed my hair the moment I got home and I still smelled like Polo for days. For days and days. And to this day, a whiff of Polo gives me some powerful flashbacks. Makes me almost gag.

I think about that event in my life every time I hear about Mary pulling out a bottle of top shelf perfume and anointing Jesus’ feet with it. This was potent stuff, a precious oil-based substance from a plant that grew thousands of miles away in the Himalayas. The fragrance fills the room, and I wonder how long afterwards Jesus still smelled like it.

This happens just one day before his entrance into Jerusalem on Palm Sunday, when the crowds sing Hosanna and proclaim him king. So I wonder if Jesus is still that epicenter of perfume, the fragrance from his feet overpowering any barnyard animal scent the donkey has as he rides it in. And given how quickly things then unfold for Jesus, I wonder if the odor of Mary’s anointing manages to fill the room that night before the Passover when he kneels down to take his own disciples’ feet to wash them. Maybe it was Mary who gives him the idea to do that—a sign of humility and servanthood, since kings were normally anointed on their heads.

And to think that maybe that perfume is what his disciples sense in the air as he teaches them that he is the vine and they are the branches, as he prays for them to remain one and love each other as he had loved them. And then I imagine those feet, still giving off that sweet aroma, walking him out into the dark night of the garden where he is arrested. Maybe he still smells good while the soldiers are beating him, flogging him, making him bleed. I’ve always imagined Good Friday to have a dark smell to it, one of sweat and dirt and wood, but maybe his feet still bear a trace of Mary’s devotion as he hangs on the cross to die. And perhaps as they take him down to bury him they all get a whiff—maybe just a slight whiff, but enough—not of death and decay, but of beauty and thankfulness and life.

Do you ever think of that? Mary used a whole pound of it, after all. It was equivalent in today’s calculations to about $40,000 worth of perfume. And since we’re told it is purchased for Jesus’ burial, it stands to reason the odor lingers from that Saturday night party at Mary’s house until the end—until the women arrive with reinforcement spices and perfume on the Sunday after Good Friday…perfume they ended up not needing, after all.

This is Mary’s act of faith. It may not be how you or I would choose to honor our Savior, and it’s obviously not how Judas would do it, but it is an expression of her devotion to Jesus and it shows, as one of my colleagues says,  that Mary “gets it.” Mary gets who Jesus is—she gets what he is about. She gets that he is worth even more than a cause, no matter how noble. He is worth more than her savings account, more than her reputation. She gets somehow—maybe it’s the fact that he raised her brother Lazarus from the dead—she gets that the weight of God’s love and power is focused in this actual body of this actual person in front of her, and that he is going to love the world so much that no amount of beating or nailing or dying will turn him away from it. And that those who cling to him in faith receive the eternal life he comes to bring. So she pulls her hair pin out and lets it down so it can cling to his oily ankles. He is the resurrection and the life, right there in her living room, and so it’s time to give whatever she can and do whatever she can to adore him.

I used to visit one homebound member who had hanging over her fireplace a large version of Da Vinci’s famous “Last Supper” made out of some dark wood like ebony or mahogany and inlaid with mother of pearl. It was one of the first things you noticed when you walked into her house. When it came time in the visit for us to have Holy Communion, she scurried off and got her offering envelope. She reappeared from another room and then, before she handed it to me to bring back to the church, she walked into the middle of the room, faced that picture over the fireplace and then, with hands and arms extended and head bowed down like she was straining ahead, she lifted her offering over her head, silently for several seconds, as if Jesus were really in the room and her gift was intended for none other than him. It was an act of devotion that temporarily halted what was happening and focused our attention on Jesus.

It is the same thing that Paul is talking about in his letter to the Philippians. Paul tells his beloved congregation that that nothing in his life measures up to the value of knowing Christ Jesus his Lord. And Paul has quite the laundry list of things to be proud of, quite a list of statuses that would open doors and turn heads. He can check all the boxes on the list of privilege and honor: the right religion, the right tribe, the right family, the right school district. Yet he, like Mary, understands that the value of Jesus, even sharing in his sufferings, surpasses them all. He forgets whatever lies behind and strains forward to what lies ahead, hands and arms extended and head bowed down. I imagine that’s similar to the mindset a college basketball team has to adopt in a tournament. Always think ahead, strain ahead to the prize. Even if you won last night’s game in a squeaker, it’s now behind you. Think of what’s next.  Survive, as they say, and advance.

The future Jesus opens for Paul is so new and so exciting and so valuable that all he really wants to do is think about what’s there, where that path is leading, where his faith may take him. And this is all new and exciting and valuable because, Paul says, “Christ has made me his own.”

In his death on the cross, Jesus has claimed you and me forever. He has made us his own. We no longer belong to the forces of this world that tempt us to put ourselves first, that trick us into devising or creating our own worth. Jesus has anointed us. He has poured his life out for us so that we may live as God’s redeemed children forever. Jesus’ love has made us treasures.

We are coming into the final days of Lent, and it strikes me that it’s kind of like an Antique Road Show. Do you know that program on public television, the one where people go into their attics and basements and see if they have anything secretly hidden away that is actually worth a lot of money? They sit down with an antiquities expert and learn about the item they’ve got they didn’t really know much about. 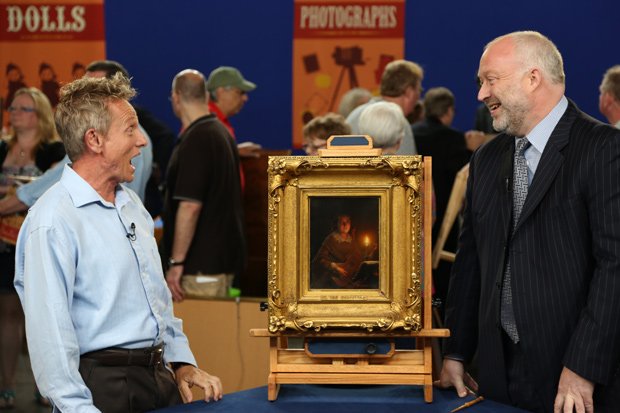 In the life and death of Jesus it is clear that God treasures us and now it’s time to turn and reflect on how much we treasure Jesus. We bring out our faith, our relationship to Jesus, which we’ve likely stored away somewhere, kind of neglected for a while. Mary and Paul are the experts who have us set it out and dust it off and tell us that for all these years we’ve been sitting on something that’s actually priceless, something that opens infinite possibilities for life, something that will really tell us who we are.

What Paul and Mary give us are challenging questions for us all to confront, for we realize there are other things we tend to adore and treasure too much—other activities and allegiances we prioritize—even when they seem to be good things. Acts of service in the community: do we do them mainly because of the impact they make, because they make us feel useful, or do we do them out of gratitude to the Savior who loves us? Our worship and music: do we love them for how beautiful and inspiring they can be, how they make us feel, or do we love the God at whom they’re directed? Our involvement in church: do we treasure it because of how holy it might make us look to others or the connections it brings us, or do we treasure this time together because it provides us opportunities to praise God? 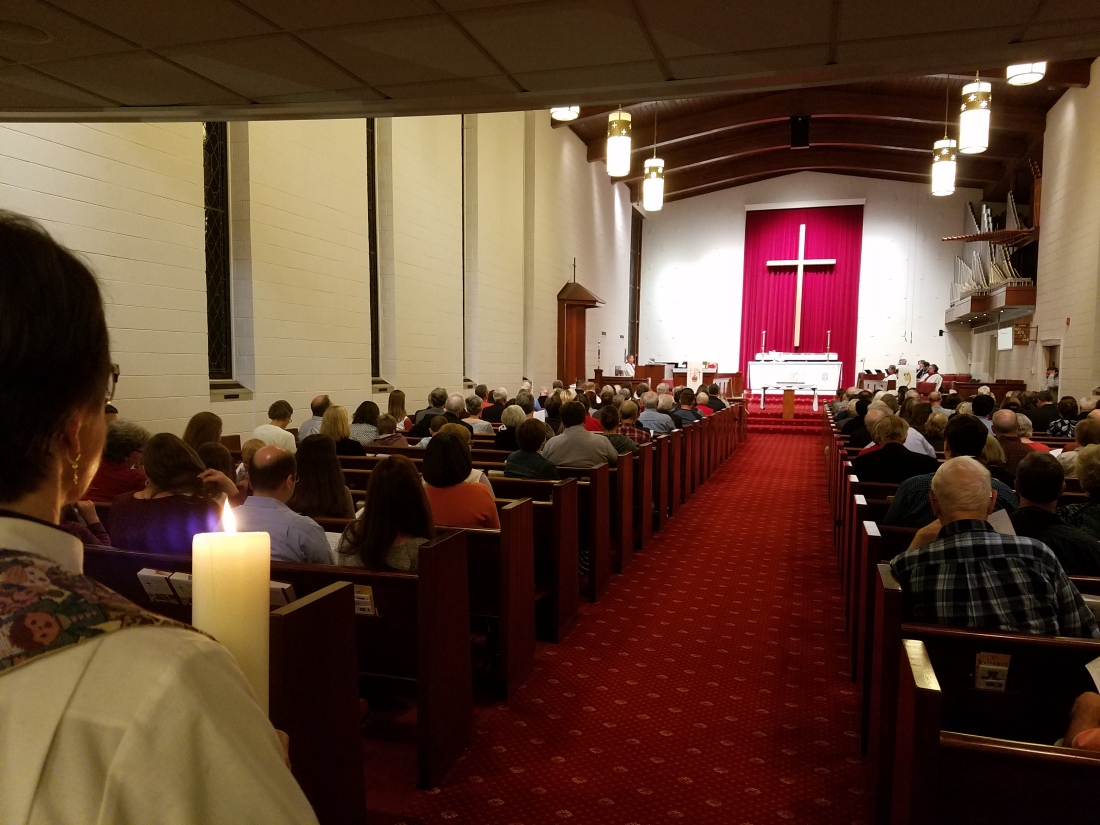 I don’t know about you, but sometimes I think I fall into the trap of believing that the church needs to legitimate its existence through the service it does. I start to think we’re only worth our salt if we’re chalking up acts of justice and mercy in the world, taking the right stances on the social and political issues. It’s so tempting to think that the best thing we can be doing as Christ-followers is making a difference in the lives of those around us, but what a cynical and self-serving way to boil down Christ’s sacrifice!

Mary’s act of faith and Jesus’ scolding of Judas challenges that way of thinking in the same way that the homebound parishioner drew the focus from what I was doing to whose picture was over the fireplace. The only thing that makes us legitimate or valuable in the eyes of anyone is the love God has for us in Jesus. He prays for us, he washes our feet, he endures the grave for us. He is the epicenter of what God is doing to fashion everything new: “Now it springs forth. Do you not perceive it?” (Isaiah 43:19).

The best we can truly do is whatever reflects our gratitude back to God, and no one can really judge that but Jesus. It is our adoration of Jesus, crucified and risen—our sacrifices of suffering and joy—which will draw everyone’s attention to the God who dies to save, which will wake the world up to the fact as it zooms in the bus down that road of life that there is this beautiful rare aroma, this beautiful heavenly fragrance of life lingering around us that, no matter what—thanks be to God!—just never goes away.