A sermon for the fourth Sunday after the Epiphany [Year C]

I don’t envy Jesus. There he is, in his hometown synagogue, giving his first recorded sermon, and he ends up almost getting pushed off a cliff for what he says. Last time I checked, that is not typically what happens when preachers give a sermon in front of their home congregation, especially their first sermon. What I’m accustomed to seeing is pride and joy and extra guests out in the pews for moral support. This congregation has sent four of its own members to seminary and one young adult to global mission in the past seven years, and each time one of them has come back to preach in this pulpit there’s been a bit of a buzz…a happy buzz.

For example, I remember when Nate Huffman, the husband of our former Faith Formation Director, who is now serving as a chaplain in our armed forces preached for us for the first time. It was on a Thanksgiving Day and we used to have Thanksgiving Day worship in the Chapel, but we knew so many would come to hear him that we held worship in here. Sure enough, there were quite a few more in attendance that year than usual, and we hung on every word. There have been similar reactions each time Ginny or Daniel or Alex or Emily have preached. We listen, and we love to hear them share the gospel.

I still have a copy of the first sermon I ever preached, which was nineteen years ago in front of my home congregation in Winston-Salem. I read that sermon a while back and, quite frankly, it should be shredded. Nobody should ever be reading that. But my hometown crowd acted like I was speaking in the tongues of mortals and of angels. I suppose it was simply because I was one of them—because, like in this sanctuary, the pulpit and baptismal font are right beside each other and many of them that day had seen me get wet 25 years prior. It was as if I had risen straight out of those waters to the place of preaching, the direct path of a disciple so clearly laid out that day. Of course, I basked in the glow of their loving comments and congratulations. But in all honesty, preachers probably like that kind of stuff way too much.

And so I don’t envy Jesus that day in his hometown synagogue. They really end up thinking he’s a stinker. So what goes wrong? To begin with, we have to read between the lines a little bit and picture what’s going on. Jesus stands up and reads a portion of the Hebrew Scriptures from Isaiah about the coming of God’s kingdom and then declares “Today, this scripture has been fulfilled in your hearing.”

The people in the synagogue are a little shocked and impressed that one of their own would be so bold as to suggest that God and God’s kingdom are encountering them right there and then. They would have been waiting on that moment for centuries, so Jesus’ words are quite a claim, even for a hometown boy. There are some mutterings in the crowd, some shifting around. A handful of people get on Twitter. And then I imagine they start to wonder if he can back this up. If Jesus heralds the arrival of God’s kingdom, what about the signs and wonders he performed in the next town over? If hope of God’s kingdom has shown its glorious face in Capernaum, why can’t we have a little taste here in Nazareth? It would be nice to see a blind person be given sight or some other miracle to go along with this sermon.

And instead of just making them happy and giving them something to really talk about, he gives them two examples of when the Word of God came first to other, foreign people—that is, to people from the next town over, people on the other side of the wall, so to speak. Jesus says that if they remember their Bible stories, they know have several examples of when God showed some kind of preference to people different from them.  He names first the widow at Zarephath, which we actually just heard in a lesson in our worship back in November. She was a non-Jewish woman living way out in Sidon, outside the territory of Israel, and she was the one who got to host the great prophet Elijah and witness the miracle of the jug of oil and jar of meal that never ran out. And Naaman was a Syrian commander, and he was the one God decided to cleanse of leprosy, even though there were plenty of people in Israel with skin diseases.

These were been stories they would have been familiar with, no doubt, but they seem provocative that day in the synagogue, spoken with the tone that reminded them that God’s Word cannot be controlled, and is not always comforting, either. As the professor Cleophus Larue of Princeton Seminary says, “The gifts of God’s grace are not bestowed because of nationality, tribal loyalty, or hometown connections,”[1] and that is disruptive to us because we love our nations, our tribes, and our hometown connections.

It reminds me of a story I once heard from a colleague about a pastor who was sent to an urban church—this was somewhere in North Carolina, I believe. As my friend tells it, the pastor realized that while the neighborhood around the church was mostly low income and people of color, the congregation itself was made up almost entirely of middle class white folks from the surrounding suburbs. After a while the pastor began some outreach ministries in the neighborhood and before long there were some community members coming to the church and getting involved in activities.

Several weeks later, a person who had been a member of the church for a long time made an appointment to come see the pastor. She sat down and said, “Pastor, there are a lot of members of the congregation who are just not comfortable with all these people from the neighborhood being here in our church.”

And the pastor said, “Well, I am doing this because I don’t want these people to go to hell.”

The woman said, “Now Pastor, don’t say that. We know that God loves everybody, including the people in the neighborhood.”

And the pastor replied, “No, you don’t understand, I’m talking about the members of this church.”

Jesus does not label the people of his hometown as racist, or stupid, or beneath him. He merely points out to them with their own stories a truth we all need to remember: God’s kingdom is going to take root and prosper wherever it is received and believed. And when we, too, hear and receive this, we are saved—saved from our own inward thinking, saved from our own dead-end roads of vanity and narcissism, saved from the hell of a kingdom where we always think we’re the center of God’s attention and no light breaks in.

Jesus escapes death this time, but our mutterings and selfish demands for something spectacular and powerful will find him again and our kingdom of death will nail him to a cross. And he will still love us. He fully knows us and he will still love us just like he knows and loves all the people God has created the world over. 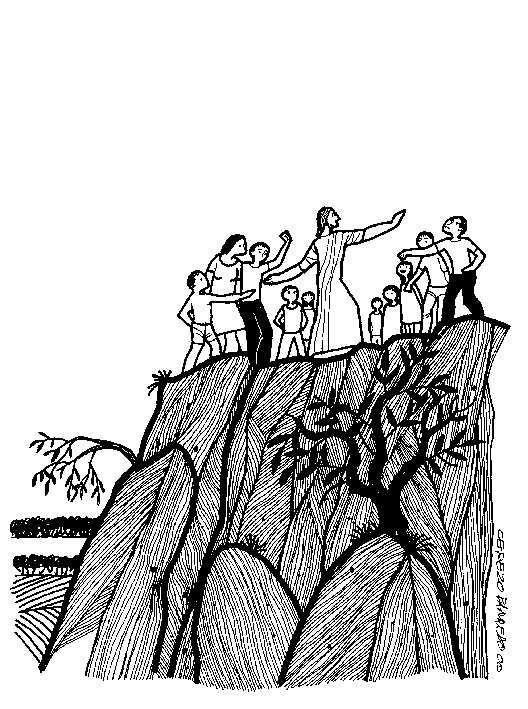 Jesus’ first sermon in one sense does not go well, but in another sense it goes perfectly well because it gets his message across loud and clear. Just because we don’t like the sound of something we hear in church doesn’t mean it’s wrong. The goal of the Word of God is not to announce something meaningful or pleasant, but to announce something that’s true, and the truth can be uncomfortable. Talking in our faith communities about complex topics that are current in our culture, like that of abortion and women’s health and when life begins, can make us uncomfortable. And yet we hear the word of God come to Jeremiah this morning and say “Before I formed you in the womb I knew you.”

Mentioning damaging things like racism and white privilege and our governor’s yearbook photo might make us uncomfortable. We might want worship to shelter us from such topics, but this morning we hear Jesus himself lift up people of other ethnicities and races as people who matter, so it’s kind of with us whether we like it or not.

Pastors I talk to often say they take heat when people think sermons are too political or that the preacher pushed a social agenda. Perhaps you have discovered that too, in your own preaching. Because you know what? It’s not just people wearing stoles that are given the task of proclaiming the good news of God in Christ through word and deed, of bearing this often uncomfortable word. There is a direct line from this font to where you’re sitting in the pew, too. Do not say, “I am only a boy,” or “I am only a girl,” or “I am only a non-ordained person.” God doesn’t think that’s an acceptable response. You were ordained in your baptism to share this message. “You shall go to whom I send you,” God says to the prophet Jeremiah, and God says to each one of us. “You shall go to whom I send you…and I have put my words in your mouth.”

To the middle school lunchroom, where people it’s clear who is shunned and ostracized…

To the neighborhood on the other side of town, where the public services and roads might not be as good…

To the friend on social media that posts things you can’t tolerate.

There is a difference, though, between the way others might share uncomfortable truths about God and the way followers of Christ do: love. The apostle Paul says our words and actions for Jesus, however prophetic and however bold they may be, are to be done in love, which is never boastful or arrogant or rude. And we can do it, folks! That love has been poured into our hearts. Our gestures and overtures can be acted out with kindness and patience, without resentment or irritability. Those claimed by Jesus don’t ever rejoice in wrongdoing, they rejoice in the truth. It’s unfortunate Twitter influences so much of our public discourse these days. Twitter and cable news is a lot of rejoicing in wrongdoing and arrogance. It’s about 90% clanging cymbals. It’s a muttering crowd wanting to hurl someone over a cliff and in many cases succeeding.

And in this embrace maybe one day we all someday see we’ve come to our true hometown.