a sermon for the first Sunday of Christmas [Year B]

Tonight it is estimated that even though it will be 11 degrees (not counting the wind chill) more than 1 million people will gather in and around Times Square in New York City to ring in the new year. The culminating event—at the stroke of midnight—involves watching a big ball drop. Statistics from past years suggest that around 1 billion people will watch that ball drop from around the world on their TV, and 100 million of those viewers will be in the United States.

The ball itself weighs 11,875 pounds. It is adorned with 2,688 handmade Waterford crystals and illuminated by 32,256 LED lights. It takes 55,000 watts of electricity to make it work. It is without a doubt the most watched and most anticipated New Year’s Eve celebration in the world. But others in other places have something festive to do, too. I remember going to Atlanta on New Year’s Eve once where they drop a big peach to ring in the new year. And in Raleigh, where I went to college, they drop a giant acorn, because it’s the City of Oaks. Just up the road in Fredericksburg I hear they drop a big pear. Is it the city of pears? And in the mountain town of Brasstown, North Carolina, they drop a live opossum. Don’t worry! He’s gently lowered in a cage and then released once it reaches the ground, becoming a hapless metaphor of the freedom and new beginning the new year tends to bring to some people. All this is sounds like a big deal. Lots of time and energy and electricity go into making these events big and yet it is estimated that almost a quarter of Americans will be asleep by the time the ball drops at midnight.

There is something alluring to at least three-quarters of us about the change from one year into another, about staying up and waiting, watching to experience this momentary event that ushers in a new time. Perhaps we’ve been waiting for a new beginning, a new excuse to start something or to change something in our lives. We make resolutions. We think, “This could be the year!”

When the young Mary and Joseph bring the baby Jesus to the temple in Jerusalem for his presentation and her purification, they meet a man and a woman who’ve been waiting not just one night but their whole lives to see a new era ushered in. The man is named Simeon and the woman is Anna. To our knowledge they aren’t related to each other, but they’ve both spent considerable time in the temple waiting for the ball to drop, so to speak, for the redemption of Israel. They are both very faithful people, sure that God will honor his promises to his people and send the Messiah that the prophets had long foretold. The Messiah was the anointed one that God would send forth to rule in righteousness and peace over Israel and over the world.

It sounds like Simeon may have gone to the temple many times looking for the right family with the right son. We’re told that Anna, on the other hand, spent day and night in the temple, as if she never left. Each day there would have been a new batch of babies for them to look at, since Jewish law stipulated that forty days after a first son’s birth the parents were supposed to bring him to the temple for a dedication and for Mary’s purification after childbirth. Also according to custom, Mary and Joseph would have made a sacrifice. Theirs is of two turtledoves rather than the traditional lamb and turtledove, which was probably a concession made for their economic status. There were new tax brackets that year, perhaps. Everything was being re-adjusted.

Regardless, in the hustle and bustle of the scene that was the temple, there stand Simeon and Anna as representatives for all of God’s people. They are representative because they have this visible hope and expectation for God to deliver on his promises. They are representative because they are patient and persistent. They listen to the prodding of God’s Spirit and do what it tells them. They are faithful and devout, and they never give up. And…they are aged. In their lives are collected a great many experiences and deep wisdom about faith.

And as Simeon sees Mary walk in with Jesus, he scurries over to her and takes the baby in his arms. It may sound somewhat dramatic and odd for a random stranger to take a baby from his or her mother in public but my guess is that it was not altogether strange back then. I know that even now when we take our toddler son to the grocery store people are drawn to him like a magnet. They get up all in his face and “goochy-goochy-goo.”

When I was serving my first parish I occasionally took Laura or Clare with me on visits to the homebound. Those visits were some of the best because of the reaction that a young child brings to an older person is magical. So many of our elders live very isolated lives, and the presence of a young person is rare. I remember this one couple had a big Rottweiler and I brought Laura over and that animal turned into another big baby. They were both wiggling all over the place and the couple I was visiting just didn’t know what to do with themselves. Typically it was all smiles when I would do this, but sometimes I’d see the glimmer of tears. I suspect that for many older people a baby brings back memories of their own children or nieces and nephews. It takes them back, causes a brief reunion with some happy earlier times in their life, and it is touching to watch. I was watching this, to some degree, after Betty Wise’s funeral reception yesterday as her children all crowded around our black and white picture from the dedication in 1962, finding themselves bundled up as little kids on the lawn of the church with their parents and family members.

That’s not what happens with Simeon and Anna. They do not replay the past. They are excited about the future. In their understanding, guided by the Spirit, the ball has finally dropped, God has sent the one they’d hoped for, and the world can step into a fresh new beginning. I can’t help but see Simeon and Jesus today somewhat like Father Time and baby new year as depicted in New Year’s Day cartoons. Simeon stands as the bent and wizened old man who is walking out, leaving things behind, ready to die, and Jesus, in his diaper and little else represents all the hope of something new. He and Anna are ready to depart in peace, ready to praise, because, as Simeon says,  his eyes have seen salvation. Just to see Jesus and behold him, as a baby, is enough for Simeon. It’s enough to know that God has sent the son, born of a woman. It’s enough to know that the light is now shining, as small as that flame may be. Simeon may not live to see how bright that flame will grow, but he knows it has finally been lit.

I do not know what about Jesus and Mary and Joseph tips Simeon and Anna off (other than the Holy Spirit) but one thing is for sure: when Simeon hands the baby back to his parents Simeon becomes the first person to understand what that salvation entails. First of all, he knows that it is for all people. Jesus is not just born for Mary and Joseph, and not just for the people of Israel, not just for people who go to church all the time, not just for people who understand theology. Jesus is God’s love wrapped up for us and given to people everywhere. No one needs to wait any more—not one second more—to find out what God’s grace is like. In fact, Jesus was truly the last thing on which the universe was waiting. Now that he has come no more balls really need to drop. Jesus has blessed every year the same…into the future…into eternity. God’s will is being done on earth as it is in heaven, in 2018 just as it was in 2017.

The other main thing that Simeon understands about Jesus is that his birth is directly connected to his death. When God’s Son is born among us, then it means, by definition, that God’s Son will die among us. You can’t have one without the other, which is perhaps why Simeon and Anna can be so joyful and be prepared to die even when they’ve only seen him as a baby. They are wise and can tell the cross is in his future. When Simeon tells Mary that a sword will pierce her own soul too, and that her son is destined for the falling and rising of many, he understands that Jesus will suffer, that his life will have consequence for us all. In the cross we see exactly what Simeon is talking about: that Jesus comes both to deliver us from evil and to confront it and defeat the evil in us. He comes to end our slavery, as Paul says, to make us all children and heirs to God.

There is no telling what kinds of events the new year will bring, but one thing we already know is that Jesus will be there. He is Alpha and Omega–the source and the ending—and so 2018 is already in the bag for him. I suspect some of us will watch the ball drop tonight and anticipate good things in the next twelve months. We think “This will be the year!” and we have our resolutions ready. If so, then we praise God like Simeon and Anna. Jesus stands ready for us.

Some of us will watch with mixed emotions, fearful of what might be around the corner, resentful of how our resolutions always turn out (or don’t). If so, then we can still praise God like Simeon and Anna as we remember he is victorious over sin and death, forgiving of our own failed resolve. I’ve been around this congregation long enough to learn there are people worshiping with us in this room right now who we will lose in 2018. We will be sad, but because Christ has come, because salvation has been revealed, we may rest assured they will be dismissed in peace.

And still others of you snoozers, you 22-percenters who will fall asleep before midnight before the fun starts, before the champagne is uncorked, before the possum and the peach and the pear even start to fall…as for you folks…well, you might be onto something! 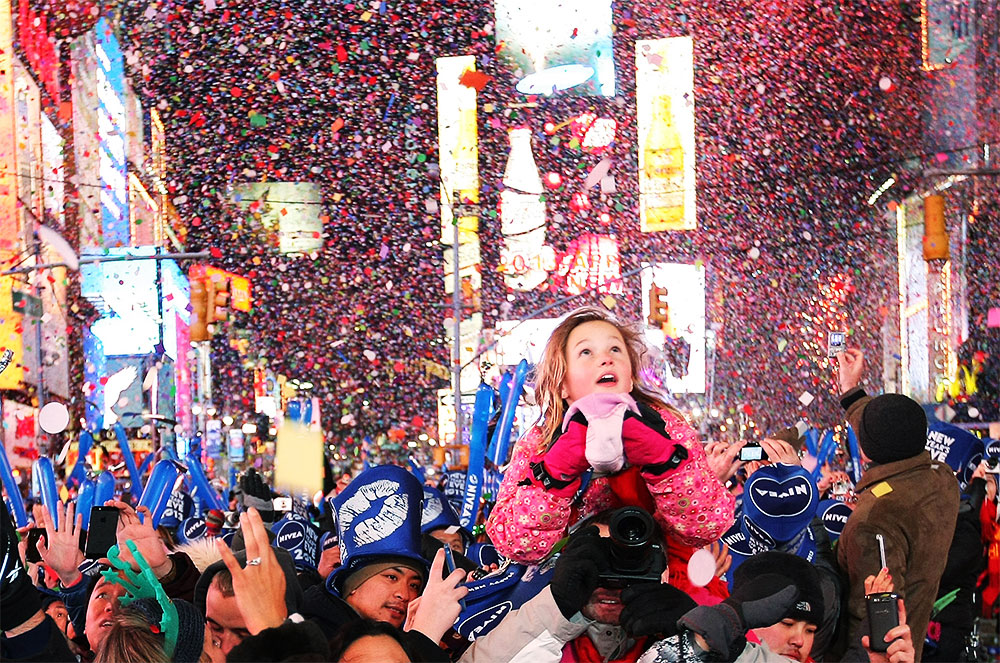